by Jack Halley and Matt Howell

Rugby players need to develop a unique combination of speed, power, and endurance that prepares them to withstand the rigors of 80-minute matches. To help them do so, coaches and sports scientists can utilize a number of monitoring technologies to ensure they’re staying on track at each stage of the season. In this article, we’ll explore the most common athlete management system (AMS) integrations used by rugby teams to derive deeper insights from players’ performance data.

Rugby players need to be strong whether attacking or defending, and by tracking their progress with a strength and conditioning (S+C) system like TeamBuildr or TrainHeroic, pro teams are able to program more effectively during the preseason, competitive calendar, and offseason. These intuitive, online platforms also allow the performance staff to build questionnaires to capture subjective athlete data concerning wellness and readiness.

When combined with objective metrics, this provides an accurate gauge of how well each player is developing and what alterations might be needed to their training regimen. Some national organizations like Rugby Australia have standardized exercise terminology across all levels – from junior sides to clubs to the national team – in TeamBuildr, making it easier for coaches to compare players against each other and make more informed selection choices.

Integrating training plans and workout data from TeamBuildr and TrainHeroic into an AMS such as Smartabase enables S+C coaches to perform more advanced analysis on the information. They can create simple, intuitive dashboards to convey an at-a-glance look to players and coaches of metrics such as daily volume load and week-on-week percentage changes, and dive deeper into certain data sets to find opportunities for improvement in the weight room. During games, rugby players need to express speed in individual bursts multiple times per game and develop repeat sprint ability – that is, the capacity to run fast, briefly slow down, and then go hard again.

A laser timing gate system such as SmartSpeed from VALD allows S+C coaches to accurately assess the quickness and agility of every squad member in an efficient manner. Rugby players are often assessed sprinting five, 10, 20, and 40 meters in single efforts, and can also be evaluated in drills common across the sport, such as yo-yo and bronco testing. This enables clubs to measure both top line speed and speed endurance – aka the ability to run quickly over and over again.

Like jump testing, speed assessments can also be utilized as a monitoring tool. Should a player be markedly slower than usual, this might suggest that their training load is too high, which could inform a temporary change in their programming.

Integrating data from SmartSpeed into an AMS allows the performance staff to evaluate individual timing information to assess the speed gains made by certain players or to assess the overall results of the entire squad. As many distances and drills are standardized across the sport, coaches can also compare results between different squads in their organization and establish benchmarks for forwards, backs, wingers, and other positions. This can then be shared with players so that they have personalized targets to aim for in forthcoming speed tests.

Whether it’s leaping for the ball in a lineout, chasing down a winger on a breakaway, or trying to get to the try line, rugby players must be able to produce large amounts of power in short order. Such a quality is expressed on the pitch but developed in the weight room. An experienced coach can sometimes see when a player is slowing down part way through a set but looks can be deceiving, and when training multiple athletes or even a full squad, a more objective measurement is needed to ensure that the quality of each rep remains high.

Enter a velocity-based training (VBT) system such as GymAware. This is the perfect tool for testing peak power in exercises like squat jumps, clean pulls, bench throws, and variations of the Olympic lifts. The coaching staff can set parameters for each movement, and the device provides audible feedback if a player drops below the minimum threshold, signaling that they should either up their intensity or stop the set, rest, and repeat it. By incorporating VBT data from GymAware into an AMS like Smartabase, coaches and sports scientists can assimilate it with S+C information from other systems to create a more comprehensive overview of players’ power and strength development at various stages of the season. They can then find any dips in individual or overall team performance and adjust future program cycles to try and mitigate these going forward. VBT data could also be overlaid with subjective surveys and objective metrics like force plate test results to identify when players are overly fatigued, as this can compromise both their output on the pitch and overall wellbeing.

Monitoring rugby players’ speed and power output in the gym is useful, but performance staff also need a way to accurately assess the load that every athlete is being subjected to in training and matches.

For the former, Catapult is the gold standard, providing data via GPS, LPS, accelerometers, and other sensors that help keep tabs on external load, mitigate injury risk, and support return-to-play for injured athletes. Some rugby clubs also use Catapult to evaluate the progress of their season plan. Coming into each week, they have intended loads for each player and position group to meet, including a certain total distance to cover, an amount of high-speed running, and so on. By monitoring each player daily, the performance staff can see who’s hitting such targets, who needs extra work to meet them, and who should have their load reduced to ensure they’re not overtraining. STATSports provides similar insights for match day, and as its wearable GPS units are approved by World Rugby, it offers standardized data that makes it easy to compare performance metrics within a team, to other squads within a national framework, and to global competitors.

Through integration with an AMS, data sets from practice and match statistics can be combined to give a more complete view of load exposure, distances ran at low and high speed, and other weekly totals. These can then be compared to targets in the overall season plan and adjustments made heading into training the following week so that players aren’t being overloaded or exposed to insufficient stimuli.

In addition to monitoring speed generated while running, rugby teams benefit from assessing how much force their players can produce during jumping. As indicative as low-tech measures like vertical and broad jump tests can be, force plates provide a more accurate measurement of each athlete’s power.

The ForceDecks dual force plate system from VALD is one of the most widely used options in the sport, and enables the performance staff to evaluate peak force, rate of force production, and left/right asymmetries that might lead to the prescription of more single-leg exercises to correct imbalances.

Integrating data from ForceDecks and other force plate systems into an AMS like Smartabase enables the sports science staff and S+C coaches to assess fatigue, injury risk, and rehabilitation, in addition to monitoring force and power outputs over time. Managing the information in the AMS means that it’s no longer viewed in isolation but can be put into context with data from VBT, speed gate, and S+C systems to see how players’ jumping data relates to their strength, speed, and power output from other testing protocols. Rugby is increasingly competitive at all levels, with players getting bigger, stronger, and faster all the time. To gain a competitive advantage, clubs can collect, aggregate, and standardize the data using the systems mentioned above, and then integrate these with an AMS to report on and visualize the information. This is how data is turned into knowledge and wisdom that’s actionable in the weight room, on the practice pitch, and on match day.

IF YOU ENJOYED THIS ARTICLE, YOU MAY ALSO LIKE… 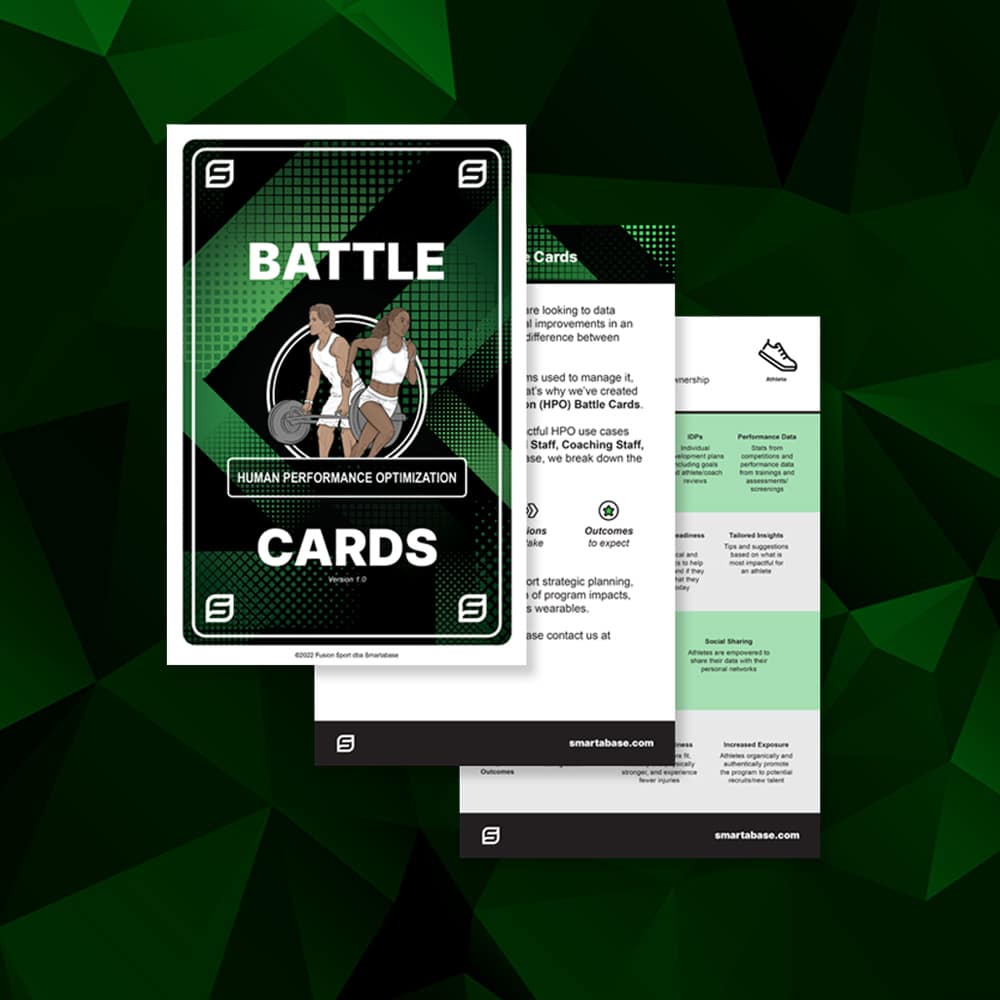 By Mike Lacina and Emma Ostermann Capturing batting and pitching data, GPS metrics, and force output in isolation can be …